Top-10 Walkabouts in Gyeongju #GyeongjuWalkabouts
Walking along the beautiful roads of Gyeongju can stimulate and satisfy your senses. Wherever you look, you can enjoy pieces of Gyeongju’s history. The rich cultural heritage of Gyeongju delivers distinct sights, sounds, and aromas. When the gentle sea breeze touches your cheeks, it will re-energize your weary legs. Enjoy the magnificent view of the spring cherry blossom tunnel, and the sound of leaves crunching under your feet in autumn. All these sites are yours to take in. All you need to do is walk. Just to save you the trouble of planning, we have put together the top-10 walkabouts in Gyeongju that can help you enjoy a combination of Gyeongju’s culture, its mountains, lakes, and the sea!

Daereungwon features a total of 23 tombs of varying shapes and sizes. It has the Great Hwangnam Tomb, Cheonmachong (Tomb of the Heavenly Horse), and the Tomb of King Michu. Daereungwon also has the famous Magnolia tree, which has become a popular spot for photos and selfies. But there is another place near Daereungwon you should check out - the Stone Wall surrounding Daereungwon. The Stone Wall of Daereungwon makes for a quiet and pleasant walk. This course starts at the rear Gate of Daereungwon, opposite the store that sells the local delicacy “Hwangnam Bread,” all the way to the main gate of Daereungwon (approx. 550m). This trail is especially beautiful in springtime when the cherry trees are in full bloom. In fact, cherry trees are planted along the entire road, creating a beautiful cherry blossom tunnel in spring. 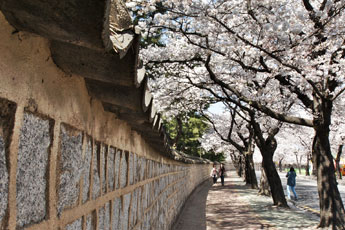 The Hwangryongsa Temple Maru Trail begins from the four-way intersection in front of Bunhwangsa Temple. It passes the Gyeongju National Museum and meanders all the way to Woljeonggyo Bridge. This trail, which was built in 2013, is only 1.5km long, so it makes for a comfortable walk. From Bunhwangsa four-way intersection to Gyeongju National Museum, the “Imhaero” trail is made with natural lumber in the style of a floor you might find in a Hanok house, and lights representing Silla in the shape of convex tiles with face motifs and Cheomseongdae. The “Iljeongro” trail connects the area between the Gyeongju National Museum and Woljeonggyo Bridge. This trail is a stamped earthen pathway with plenty of rest spots along the way. This is a great trail to take if you want to see the Woljeonggyo Bridge and the Namcheon stream. In spring, cherry blossoms spruce up the trail, while in autumn, cosmos flowers welcome people along the trail. The wide-open, panoramic view of the fields along the way always keeps things light and pleasant. So, why not take a walk along the Hwangryongsa Temple Maru Trail? 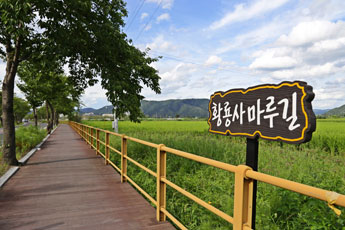 With various hotels, resorts and theme parks all gathered in one place, Bomun Tourist Complex is one the must-see attractions of Gyeongju. The Bomun Lake Walking Trail circles the huge manmade Bomun Lake. In November of 2014, all pathways along the lake were refurbished. The beautiful scenery is accentuated with beautiful bridges such as the Mulneoul bridge, Hoban No.1 bridge, and Jinggeom bridge. Also, there are plenty of small parks where eyou can take a break such as the Sarang park, Mokweol park, Mulneoul park, and Mulhyang rest area. This trail is relatively flat without any major inclines, and at 8km, it’s the perfect option if you want to enjoy the panoramic view of the lake. 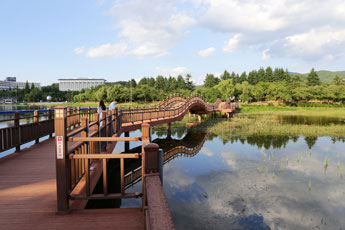 This is one of the most famous autumn attractions in Gyeongju. Gingko trees grow on both sides of the straight road leading to Tongiljeon, which was built to commemorate the achievements of Unified Silla. The best time to visit the trail is in late-October to early-November when the trees turn into a beautiful yellow color. Also, when you arrive at Tongiljeon, you’ll be surprised by the magnificent view it provides of the surrounding area. 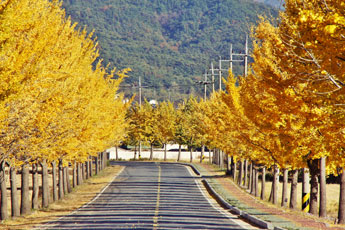 King Shinmun’s Hoguk Haengcha Trail is the gateway to the east coast. This 4.5km-long mountain trail runs from Mocha Valley under Churyeong Tunnel, and passes through Surabjae and Yongyeon Falls to Kirimsa Temple. This trail was the path of King Munmu’s funeral procession. King Munmu desired to be reincarnated a Dragon of the East Sea and protect the country from Japanese pirates. That’s why he wanted to be buried at sea. This is also the trail his son King Shinmun went to receive the Manpasikjeok flute from the spirit of King Munmu. Legend has it that the flute could calm any storm that was threatening the kingdom.

This trail connects the foothills and ridges between Tohamsan Mountain and Hamwolsan Mountain, and it has places along the way with names derived from the ceremonial procession King Shinmun. Mochagol (Cart Valley) is a village name that originated from a valley where carts could enter and exit. Another pass was named Suretjae (Wagon Pass) because it was the main pass through which wagons could pass. A steep slope, where horses had to exert themselves hard to pull their carts through was named Malguburi (Bended Horse). But the highlight of this trail lies further down - the Yongyeon Waterfall. Cool water falls from this 15m-high rock waterfall which is surrounded by cliffs on both sides. The course concludes at the 1,000-year-old Girimsa Temple, which was said to have been established during the reign of Queen Seondeok of Silla. 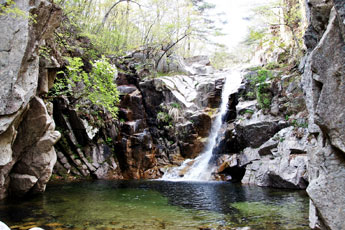 Take a stroll along the "Dongnamsan Trail,” which is full of Silla Buddhist artifacts. At about 8km-long, this trail stretches from Woljeonggyo Bridge to Tongiljeon Hall. The trail itself was reorganized as recently as 2014 to make it easier to walk. Namsan Mountain is so full of precious cultural heritage, which is why people call it an “open-air museum.” On the way to the Dongnamsan Mountain, there are many sites built during the Silla Kingdom, including the Seated Rock-carved Buddha of Bulgok, Rock-carved Buddha of Tapgok, Seochulji, and Dongseo Three-Story Stone Pagoda. It's a long course, but there is never a dull moment because of the cultural monuments along the way. Also, in the middle of the course, you’ll find the Gyeongbuk Forest Environment Research Institute, which is a great place to sit down and take a break 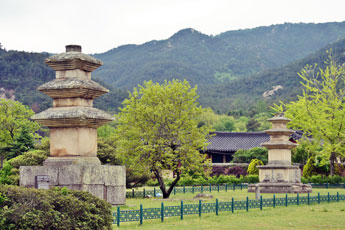 Where else in the world would you be able to see the entire mountain listed as a UNESCO World Heritage Site? That makes Namsan unique. It is home to 694 cultural heritage sites, including 13 royal tombs, four mountain fortresses, 150 temples, 129 Buddhist statues, 99 pagodas, 22 stone lanterns, and 19 Lotus Flower Pavilions. 48 of these heritage sites, including one national treasure, have been designated as cultural assets. If the Dongnamsan Trail gave you a sense of Silla’s Buddhist art, the Samneung Trail will give you a taste of Silla’s rise and fall as a Kingdom. From Najeong, the birthplace of its first king of Silla (King Park Heokgeose), to Poseokjeong, a prime example of the decadence Silla enjoyed during its final years, you’ll learn the entire history of Silla. Another option is to explore the pine forests along the way. The Samneung Trail is 8km-long, so take your time and walk along at a leisurely pace. 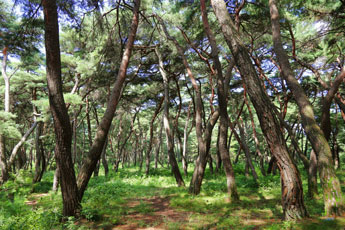 The Gampo Kakkji Trail is a meandering trail that follows along the coast. There are seven courses, including the coastal walk trail, waterfront cycling trail, scenic driving road, meditation trail, etc. Among the courses available at Gampo, the most popular is trail no. 4. The Gampo Kakkji Trail also features Japanese-styled houses (敵産家屋) that were built during the Japanese occupation of Korea, a lively fresh fish market, and the beautiful Artic Daisy alleyway, which is a great spot to take photos. 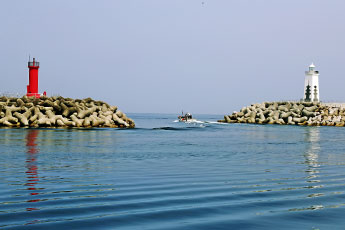 At the end of Yangnam Jusangjeolli “Sound of Ocean Waves Trail,” a new trail to Haseo Port begins. At the end of the breakwater of Haseo Port is Water Light Love Trail, which features a place to attach “Love Locks” (padlocks with the names of couples written on them and attached to a fence). This long coastal promenade runs from Haseo Port to Haseo Coast Park. A decked walkway is installed on the seashore along with beautiful lotus-shaped bridges that add to the magnificent scenery. Not only that, there are beautiful cafes with oceans views that are perfect places to rest and appreciate the scenery. 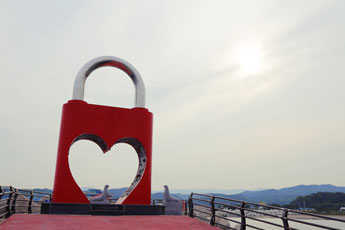