Gyeongju Coastal Tour on Bus No. 100

From the main tourist attractions in Gyeongju to the East Sea!
For more than 2,000 years, Gyeongju has been the home of Silla’s rich cultural heritage. While there is much to see in Gyeongju, the ocean is just a 40min bus ride away. That’s why Gyeongju gives you the whole package. Bus no. 100 will take you past the main tourist spots in the city such as Cheomseongdae, Donggung and Wolji, past the tourist Mecca of Bomun Tourist Complex, and continuing until you reach the East Sea. The quiet countryside and scenic views of the fishing villages make calm your mind and allow you to feel refreshed. On your trip to the East Sea, you can enjoy the cultural heritage of Gyeongju waiting for you around every corner.
There are two bus services (bus no. 100 and bus no. 150) that go to the East Sea. The buses split directions at the Eoil Bus stop in Yangbuk. Bus no. 100 goes to Gampo, while bus no. 150 goes to Yangnam. These two buses can take you to all of the famous spots on the East Sea. First, let’s have a look at bus no. 100.

Gyeongju introduced the Bus Information System (BIS) during the second half of 2016. The BIS system allows you to check bus departure/arrival information as well as dispatch intervals with your smartphone through its application (“National Smart Bus”).

Note: Bus 100-1 stops at each hotel/resort in Bomun Tourist Complex

Take bus number 100 and get away from the downtown area and Bomun Tourist Complex, and escape to Gyeongju’s beaches on the East Sea. If you travel 30-40 minutes by bus from the city center, you’ll reach the first destination, Golgulsa. Golgulsa Temple is one of the oldest Buddhist temples in Hamwolsan Mountain, which right next to Tohamsan Mountain. During the 6th Century Silla period, when Buddhism flourished as a state religion, a group of Buddhist monks from India visited Silla and turned 12 stone caves into temples and shrines. Dunhwang Grotto is an artificial stone cave temple carved out of limestone cliffs. At the top of the cave, there is the Gyeongju Golgulam Seated Stone Buddha Statue which was designated as National Treasure number 581.
The likelihood is that 7 out of 10 foreigners taking this bus might be on their way to Golgulsa Temple. This Buddhist temple is visited many Korean and foreign tourists and is the best-known temple for a type of martial art called Seonmudo. Golgulsa Temple has a traditional Seonmudo program that helps people find their true selves.

Going to Golgulsa Temple on Bus 100

The best place to stopover on your way to Gampo Port is Jeonchon Port. Jeonchon Port is one of the top the stopover points on the “Blue Ocean Road,” which is the country’s longest walking trail that starts on Oryuk Island in Busan and ends in Goseong of Gangwon Province. In order to refurbish the town as a tourist fishing port, various utilities were installed including a fountain, pergola, and observation deck. The night view of the breakwater is also worth seeing. Be sure to capture the view of the harbor from the observation deck. In the morning, one can see the shimmering sea and the peaceful village that appears as if it is protecting the harbor. Not far from Jeonchon Port is the Jeonchon Pine Beach, a beautiful beach with a gorgeous Black Pine forest.

The scenery of Gampo Port will remind you of a fisherman dreaming of a full catch and steering his fishing boat out to sea. Gampo Port also has a live fish market that auctions fresh fish. In 2020, Gampo Port celebrates its 100th anniversary as the biggest port of Gyeongju, which is why you can expect so many things to see and do. It is well worth visiting Gampo Gongseol Market on days ending in the number 3 and 8 to try the local delicacy - flounder sashimi.
The intricate network of streets and alleys inside the harbor town near Gampo Port has been organized into the “Gampo Kakkji Path,” which is a fantastic walking trail featuring beautiful murals along the way. Also, Gampo Kakkji Path passes by more than 20 Japanese styled houses used during the Japanese colonial occupation of Korea, which gives you a chance to reflect upon our country’s painful past.

Going to Gampo Port on Bus 100

Gampo Port and Gampo Ocean Park are easily accessible, and the best option is to visit them together on the same day. Sashimi restaurants line the streets of Gampo Port all the way to Gampo Ocean Park. Equipped with coastal decks, a pinwheel garden, Gampo Port-related sculptures, benches, toilets and a car park, construction of the Park was completed last year.
Directly connected to the Ocean Park, the breakwater at Gampo Port is the perfect place to be if you love fishing. For tourists, Gampo Ocean Park is a can’t-miss attraction because of its beautiful lighthouse which features the silhouette of the three-story stone pagoda at Gameunsa Temple. At Gampo Ocean Park, you can take your time and fill your heart with memories of the blue ocean, enjoy the lively action at Gampo Port, and immerse yourself in the peaceful tranquility of the Gampo fishing village.

Songdaemal(松臺末), which means “edged with pine trees,” is famous for its beautiful sunrise and lighthouse. It is protected by a Black Pine forest with trees that are more than 200 to 300 years old. The breakwater features a carved three-story stone tower called the Songdaemal Lighthouse. The lighthouse stands on top of a Hanok-styled building and in front of a wooden deck that spreads our into the sea to let visitors get closer to the water. From the deck, you enjoy a beautiful sunrise and immerse yourself in the breathtaking beauty of the East Sea.

Going to Songdaemal Lighthouse on Bus 100

It would be a real waste to miss out on seeing the city at night on the way back from Gampo. So, why not check out Gyeongju’s famous landmarks at night? Cheomseongdae is the signature heritage landmark of Gyeongju. Since its construction during the reign of Queen Seondeok, it has stood as the guardian of the city for 1,500 years.
When the sun goes down and the lights start to come on, you’ll become mesmerized with the beauty of Cheomseongdae. Nothing will be able to tear your eyes away from the ancient observation tower. Walk around Cheomseongdae slowly. Think of the meaning hidden behind each stone brick, and learn why each stone was placed in a particular direction. You’ll be amazed at the sophisticated architecture and science technology the people of Silla were able to achieve.

Going to Cheomseongdae on Bus 100

Just 5 to 7 minutes on foot from Cheomseongdae is the number one tourist hot spot in Gyeongju in the evening - Donggung and Wolji. There is no better way to finish your tour on bus no. 100 tour than with this colorful finale. Donggung and Wolji used to be a palace for princes during the Silla period. In its heyday, it was used for banquets with royal retainers and envoys. It has an ocean-like pond with artificial islands and the nearby forest features some of the best examples of Silla landscaping techniques. In particular, look out for the reflection of Imhaejeon, the main building of Donggung and Wolji, shimmering on the water. It’ll be one of the most beautiful sights you’ll ever see in your life. 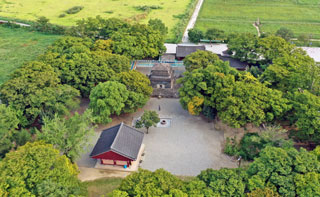 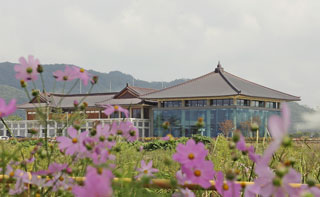 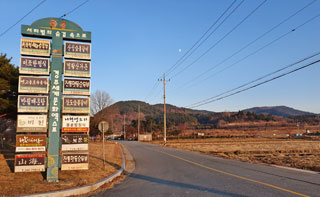 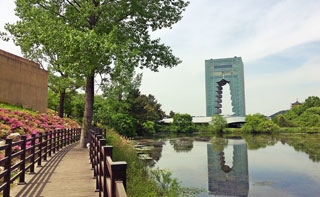 How to find information on Gyeongju City Bus Routes