The Rise and Fall of Silla
Namsan Mountain in Gyeongju was a sacred site for the people of Silla. It witnessed Silla's thousand-year reign over the Korean peninsula, and features parts of its history on every bank, every ridge, and every peak. Namsan Mountain is largely divided into Seonamsan (featured prominently during the beginning and end of the Kingdom), and Dongnamsan (home to numerous artifacts related to the Buddhist religion). The Seonamsan path (Samneung Trail) leads on to Samneung and the Dongnamsan path (Dongnamsan Trail) give you’re a chance breathe in the history of Silla. The two trails are also great on a bicycle. Let’s head over to Seonamsan, home to the origin story of the very first king of Silla (Najeong), a popular venue for banquets during the Unified Silla period (Poseokjeong).

We begin our trip at Woljeonggyo Bridge, which used to be a gateway connecting Wolseong (royal palace of Silla) and Namsan Mountain. The name Woljeonggyo Bridge was first discovered in a record made during 19th year of King Gyeongdeok’s reign (Unified Silla) by Kim Bu-sik in his book Samguk Sagi (History of the Three Kingdoms). There, he stated that, “On the Muncheon stream there are two bridges, the Woljeonggyo Bridge and the Chunyanggyo bridge.” Both bridges were made primarily with wood and lumber, which meant that they succumbed to the elements over time. The Woljeonggyo Bridge restoration project began in 2008, and ended in 2013. Later on, in 2018, the gatehouses on both sides were completed. On the second floor of the gate tower, there is a video exhibition showing the restoration process of the bridge, and an exhibition hall where you can see the excavated relics.

Leaving Woljeonggyo Bridge behind, if you follow the Namcheon embankment for a short distance, you’ll arrive at Oreung. Oreung is the royal tomb of Silla’s progenitor, Park Hyeokgeose. There are five tombs together - which is why the tomb complex is called Oreung - consisting of four mound-type tombs and one circular-type tomb. The Samguk Sagi states that the first King of Silla, Park Hyeokgeose and his wife Queen Al-Yeong were buried here along with the second King Namhae Chachawoong, the third King Yuri Yisageum, and the fifth King Pasa Yisageum. Legend has it that sixty-two years after ascending the throne, Park Hyeokgeose ascended to heaven, and his dead body was scattered on the earth seven days later. Then, not long after the King’s death, the Queen also died. When people tried to bury the Queen and Hyeokgeose together, a large snake appeared and interrupted the funeral. As a result, his body was buried in five pieces. Today, people call the tomb Oreung (五陵, Five Tombs) or sometimes Sareung (蛇陵, Snake Tomb). Within the vicinity of Oreung, there is the Alyeongjeon Well where Queen Al-Yeong was born, and Seongdeokjeon (Temple of Virtuous Worship) where King Hyeokgeose’s ancestral tablet is enshrined.

King Hyeokgeose was laid to rest right next to where he was born. Not far from Oreung is the place of his birth known as Najeong. Before the Silla was created, the region was ruled by six chiefs of the ancient Gojoseon Dynasty who lived in the six villages known as Alcheon Yangsan Village, Dolsan Gohe Village, Chusanjinji Village, Musan Daesu Village, Geumsan Gari Village, and Myeongbulsan Goya Village. One day, the chief of Gohe village saw a horse kneeling and crying at the foot of Yangsan Mountain. When he went down the horse was gone but there was a large, shining egg. From this egg, according to legend, Hyeokgeose was born. The six chiefs saw the bizarre birth of the child and the extraordinary intelligence the boy seemed to exhibit throughout his childhood. Soon, they anointed him as a King, and built a Kingdom named Seorabeol. It was the moment of Silla was born.

Excavations of Najeong revealed octagonal building sites and oval well sites. It is also assumed that the octagonal building was the site of a shrine, a sacred building that is said to have been built where Park Hyeokgeose was born. Najeong has several stone relics and monuments built during the Joseon Dynasty as well. 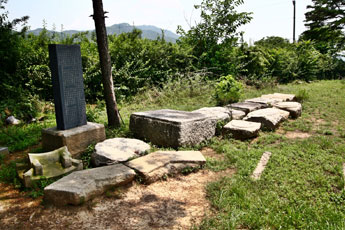 What goes up must come down. Sadly, even Silla, which was the longest uninterrupted kingdom in the history of Korea, had to come to an end. Silla enjoyed its heyday under King Heongang. According to the history books, the rain and wind fell and blew at just the right times during the reign of King Heongang. Also, every house in the city of Geumseong were lined with tiled roofs, and the houses were so large, people on the street never had to use an umbrella even when it rained. Poseokjeong Pavilion, created during the reign of King Heongang, was said to be a venue for banquets. It was created during Silla’s heyday and appears frequently during the latter half of Silla’s reign over the Korean peninsula.

According to legend, Chinese master calligrapher Wang Hui Ji used to play a drinking game called Yusanggoksuyeon (流觴曲水宴) with his friends where they floated wine glasses to each other on the water. The person receiving the floating glass had to recite a poem. If he failed to do so by the time the glass got to him, the person was forced to drink. Poseokjeong is said to be inspired by this legend. The Pagoda has long since disappeared but the water canal called Yubaegeo still remains. With a height difference of about 6cm, this 22m-long canal was used to create a swirling current. The shape resembles and abalone, which is why it features the Chinese character “po” (鮑) in its name.

Poseokjeong is one of Gyeongju’s top attractions in autumn. The rich green trees near Poseokjeong turn to scarlet, and the foliage soon fall as the trees prepare for winter. There really couldn’t be a more apt metaphor for the rise and fall of Silla. 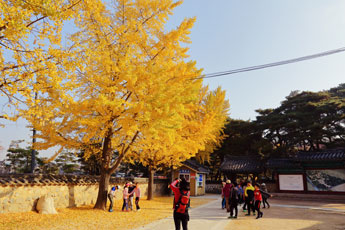 Once you’ve enjoyed the melancholy sights of Poseokjeong, it’s time to head over to Baedong. Before making your way to the final stop, Samneung, first take some time to see the Sambulsa Temple. At the beginning of the Namsan trail, you’ll come across a triad of Buddha statues. When you think of Silla and its people, you’ll think of that roofing tile with a smiling face pattern. But the Baedong Stone Buddha Triad also gives you a fantastic idea of how people may have smiled during the Silla dynasty. They have such gentle smiles that feel infinitely benevolent. Originally, the statues were scattered across Namsan Mountain behind the Sambulsa Temple. In 1923, however, they were rescued and placed together in their current location.

The statue in the center is the Amitayeorae, who governs the Western Paradise. The statue has a full face with round eyebrows and ample cheeks that add to the softness of the Buddha’s features. he Buddha on the left is Gwanseeumbosal, who rescues the common people with her mercy. She also has a gentle smile. The Buddha on the right is a statue of Daesejibosal, which symbolizes wisdom, and is decorated with splendid ornaments. All three Buddhas are wearing a necklace woven with beads and flowers hanging from their shoulders, all the way to their feet. Aesthetically beautiful and religiously pious, these triad of statues are hailed as some of the best examples of Buddhist sculpture and art during the 7th century. If you see their smiles as you walk along the beautiful trail, you’ll feel as if they are healing your heart with their benevolent powers.

Next up is Samneung, which is perhaps the highlight of the Samneung Trail. The Samneung Trail is one of the best hiking courses near Seonamsan Mountain, and it passes through lush pine forests, the Gyeongae Royal Tomb, and the tombs of three kings from the Park Clan. On your way to Samneung, the very reason why the area got its name, you’ll meet pine forest. The forest trail can be uneven, so it might be a better idea to leave your bicycle on the side of the road, and proceed on foot. The pine forest near Samneung is well-known for its beautiful scenic view, which is why it has often been used as the backdrop to various types of media content, including TV shows, movies, and advertisements. In particular, the morning sun rising through the pine trees, and the stunning contrast between evergreen pine trees and white snow are regarded as two of the top highlights you can experience in the pine forest near Samneung.

If you follow along the 200m-long pine forest trail, you’ll arrive at some royal tombs. These tombs belong to the three kings of Silla from the Park clan - King Adalla (8th), King Shindeok (53rd ) and King Gyeongmyeong (54th). If you travel a short distance to the south from Samneung, you’ll find the tomb of the 55th King of Silla, King Gyeongae, who was the last king from the Park clan. Many Kings from the Park clan lay buried in tombs near the foothills of Seonamsan Mountain, including Oreung, Samneung, and the Tomb of King Gyeongae. Meanwhile, on the opposite side, Dongnam Mountain is mostly home to the tombs from kings of the Kim clan. 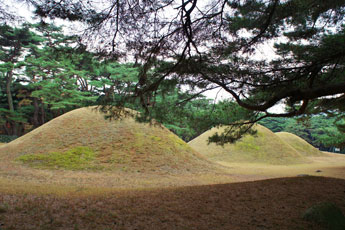 As you come back from Samneung and head into the city, why not rest for a while at the Gukdang Village? This tranquil village is just three minutes by bike from Hwangridan-gil, yet it seems like it belongs to another world. A few pretty cafés, restaurants, and workshops are gathered together here, so check out the restaurants if you’re feeling a little hungry. If coffee is what you’re after, go to one of the cafés. Or, you can check out the workshops if you want to find something interesting. 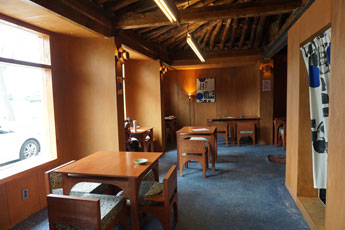 Cowl 107 is an Italian restaurant that uses all-natural, high-quality ingredients. You’ll definitely enjoy their salads, pastas, and steaks that come in a course meal style. With dishes prepared with great care and attention, Cowl is great value for money. 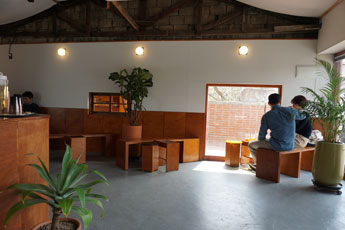 The large windows bring the serene scenery of Gukdang Village right into the cafe. The wooden interior creates a warm ambiance that is perfect for a quiet cup of coffee. 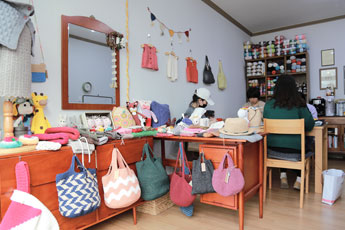 The Nordic way of life - a cozy, warm and simple life - is called "hygge." Knitting studio Hygge 3.5g is also a place that pursues such warmth and simplicity. You can sit for a hand-knitting class (e.g. crochet knitting and long needle knitting), or browse and shop for knitted products.

Important safety tips you should remember when riding a bicycle!!
Bicycles are classified as “cars” according to the Road Traffic Act. As such, if you can’t find a cycling lane, you have to use the road instead of the sidewalk. Use the lane on the right side of the road and take extra care in heavy traffic. If you follow the traffic rules, you’ll have a safe and exciting trip. And don’t forget to learn the traffic signs you need to know when riding a bicycle.