The Illuminated Gyeongju Nightscape Tour, Walking Tour for Night Owls
When the sun sets and night falls on Gyeongju, you’ll notice the bright lights and signs of some of the top attractions across the city of Gyeongju. From sunset to the depths of night, Gyeongju becomes a kaleidoscope that enchants travelers. You’ll become mesmerized watching the sun setting across Gyeongju as you sit comfortably inside the Hwangridan-gil Rooftop Café. The hues of the Donggung and Wolji turn from red to purple to midnight blue during what is known as the “magic hour.” In the earlier hours of the evening, moonlight shines on the ancient tombs on the road from Cheomseongdae and Gyelim. If you’re feeling tired from walking around all day, you can head over to the Jungang Market, a haven for night owls looking for some irresistible late-night snacks. The night will come and go far too quickly in Gyeongju. It’s never enough to see all of the city’s attractions. But no matter how many nights you get to spend in Gyeongju, you’ll leave with great memories that can last a lifetime. So, let’s see what you can expect on your Gyeongju Nightscape Tour.

#1Sunset at the Hwangridan-gil Rooftop Café

Several years ago, as young people started to move into the Hwangnam-dong area, they attracted plenty of souvenir shops, independent bookstores, small shops, trendy cafes, and restaurants. Hwangridan-gil has become a must-see attraction when traveling to Gyeongju. There are many shops on both sides of Poseok-ro from the Naenam Intersection to Oreung. Cute cafes, restaurants, and shops offering various activities to do have now spread into nearby streets and alleyways. Today, Hwangridan-gil stretches all the way from Hwangnam-dong and Sisa-dong. If you're walking along Hwangridan-gil in Hwangnam-dong during the late afternoon, you’ll find a café with an awesome rooftop, where you can enjoy the sun setting across Gyeongju’s skyline of traditional Korean houses (Hanok). Hwangridan-gil is located in the immediate vicinity of Daereungwon and is protected under the Cultural Heritage Protection Act. There aren't many high-rise buildings, which is why you can enjoy a bird’s eye view of Hwangridan-gil even from a fairly short building. 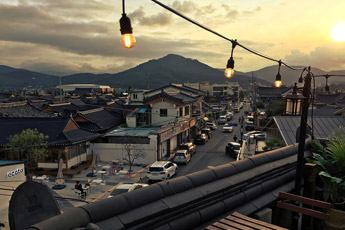 This café is where actor Gong Yoo did one of his photoshoots, and also where a popular TV entertainment program called “The Dictionary of Useless Knowledge” (tvn channel) filmed one of its episodes. While the main part of the café is located on the 1st and 2nd floors, the place you want to be in the evening is the rooftop area on the 3rd floor. It’s one of the best places to enjoy Gyeongju’s skyline at night. Café Neung was built inside an old public bathhouse – it even kept the signage used by the old bathhouse! This retro feel is one of the reasons why Café Neung has become a popular photo spot (especially the old bathhouse sign). And the rooftop on this traditional two-story building is perfect for capturing the dense Hwangnam-dong landscape. 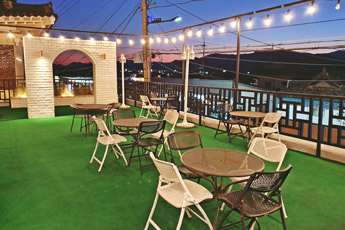 This cafe is part of “Soseoljae,” a Hanok-Stay (accommodation) establishment, which uses a renovated Hanok built in 1909. If you go up to the 2nd floor rooftop area of Café 1909, you’ll catch a peek of Soseoljae Hanok-Stay’s cozy courtyard. 1909 also has a great brunch menu, so don’t forget to try it while you’re there.

If your heading over to Daereungwon from Hwangridan-gil, it’s faster to use the rear gate rather than the front gate. Daereungwon Park is an ancient tomb complex that features 23 ancient tombs from the Silla Kingdom across 31 acres. Even if you’ve missed out on Daereungwon during the day, there’s no need to panic. Daereungwon is a cultural heritage of Gyeongju that remains open at night along with Cheomseongdae and Donggung and Wolji. One of the highlights of Daereungwon at night is its stunning magnolia tree near what is known as the “Photo Zone of Daereungwon.” 30 minutes before and after the sunrise or sunset is the best time to be at Daereungwon. People call it the “Magic Hour.” It’s the best time to take pictures, and if you visit the Photo Zone at Daereungwon during the Magic Hour at sunset, you’ll probably see plenty of other people waiting to capture the magic of Daereungwon at night. The ancient twin tombs, which resemble the shape of two salad bowls facing the ground, show off their beautiful ridges, and the blazing sunset behind them makes them a truly beautiful sight. Once you’ve captured the magical views of Daereungwon at sunset with your camera, take a tour of the main tombs at the Daereungwon - the Tomb of King Michu, Cheonmachong (the Tomb of the Heavenly Horse) and the Great Hwangnam Tomb. All of these tombs are illuminated with lights along the route. While you’re there, don’t miss out on the Cheonmachong Tomb. Its doors remain open at night, so you can look at what’s inside it. 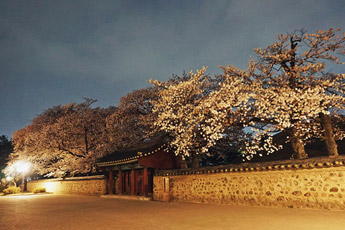 Starting from the back gate of Daereungwon, take a look around the main burial mounds, then head over to Daereungwon’s main gate. There, you’ll be a stone’s throw away from Cheomseongdae. Cheomseongdae is the oldest observatory in Asia, built during the reign of Queen Seondeok of Silla. It appears much more beautiful at night because it was built as an observatory for stars. Under the moon and the inky black sky lined with bright stars, Cheomseongdae shines bright, just like one of those heavenly bodies it was built to observe. The movements of the sun, moon, and sky were captured in each of Cheomseongdae’s rocks. Designed to emulate the shape of sky and earth, the top is round while the bottom is square. The 365 stones used to build Cheomseongdae signify the number of days in a year, and the 29 levels from the foundation to the capstone represent the number of days in a lunar month. The top 12 columns and the bottom 12 columns of the window symbolize the 24 seasonal divisions of the year according to the lunar calendar. The more you know, the more you’ll see and understand just how scientifically profound the architecture of Cheomseongdae really is.

As you venture deeper into the night, the moon will start to hover over the burial mounds in the Eastern Historic Site adjacent to Cheomseongdae. Walking under the moonlight, you’ll soon find Gyelim. Gyelim is an old forest that is home to the origin story of the progenitor of the Gyeongju Kim clan, Kim Al-ji. The forest is believed to have existed as far back as the first days of the Silla Kingdom. Back then, Gyelim was known as Sirim (始林). In the ninth year of King Talhae (65 CE), the king saw a bright light and heard the crowing of a rooster in the forest. So, he sent an envoy to investigate. The envoy saw a golden chest hanging from the tree, and underneath, a white rooster crowing. When the king received the news, he went to Sirim, opened the golden chest and found a baby boy inside. He named the child Al-ji (閼 智), and because he came out of a golden chest, he gave the boy the surname Kim (金). Over time, Sirim came to be known as Gyelim.

Woljeonggyo Bridge served as a backdrop for both, the story of the “Road of Love,” which involved the love affair between a Buddhist monk named Wonhyo and Princess Yoseok, and the “gateway” connecting the royal palaces of Silla to the south. The name Woljeonggyo Bridge was discovered in a record made during the 19th year of King Gyeongdeok’s reign (Unified Silla dynasty) by Kim Bu-sik in his book entitled Samguk Sagi (History of the Three Kingdoms). The record stated that, “On the Muncheon stream there are two bridges, the Woljeonggyo bridge and the Chunyanggyo bridge.” Chunyanggyo Bridge was located near the Gyeongju National Museum. The Woljeonggyo Bridge restoration project began in 2008, and ended in 2013. Later on, in 2018, the gatehouses on both sides were completed. On the second floor of the gate tower, there is a video exhibition showing the restoration process of the bridge, and an exhibition hall where you can see the excavated relics. Woljeonggyo Bridge is one of Gyeongju's must-see attractions at night. You can't help but be attracted to the shape of the wooden bridge shining on the Muncheon stream (Namcheon stream). The best spot to appreciate Woljeonggyo Bridge’s beautiful looks is in the middle of a little bridge in front of Woljeonggyo made with stepping stones. The Bridge is open until 10:00pm at night, so you can enjoy the view and walk directly across the bridge late into the evening. 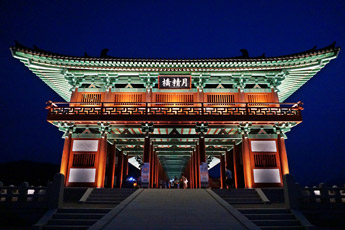 Without a doubt the number-one place to be at night in Gyeongju is Donggung and Wolji. According to the Samguk Sagi (History of the Three Kingdoms), in the 14th year of King Munmu (674), the king had a pond dug inside the royal palace featuring flowers, rare birds, and animals. Donggung was the royal palace where the princes of the Silla Kingdom lived, and Wolji is a pond designed to look like the sea. The name "Anapji" may be more familiar to some people. During the Joseon Dynasty, Donggung and Wolji fell into ruin, and became a popular breeding ground for geese and ducks. That’s when people started calling the pond Anapji. But in 2011 it once again the original names were restored for both Donggung and Wolji. Donggung and Wolji have been restored along with another affiliated building “Imhaejeon,” which was used as a banquet hall for envoys and royal retainers. Wolji is 200m-long from east to west, and 180m-long from north to south. It has a straight shoreline around the southwest, and a meandering shoreline along the northeast. Due to this shape, it is not possible to capture the pond in one photo. That’s why it feels like the sea, where you can’t see where the water ends. Donggung and Wolji is a place that displays the extremes of Silla-styled landscaping. When the night falls on Donggung and Wolji, you can see Imhaejeon reflected in the waters of Wolji. 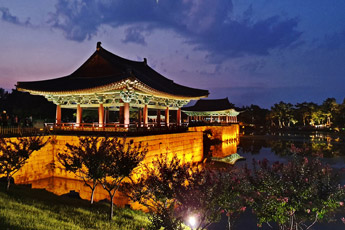 When you start feeling hungry, you can head over to the final destination of your walking tour - the Jungnang Night Market. The Market is quite far from Donggung and Wolji. If you’re not too tired, you can walk. Or you can take the bus or a taxi to get there. Jungang Market is one of Gyeongju's most popular markets with a history that dates back more than 100 years. Local people call the Seongdong market near Gyeongju station the “upper market” and the Jungang market the “lower market.” In any case, the two markets are two best places if you’re looking for an authentic traditional market in Gyeongju. The Jungang Market has been in place for a long time in the form of five-day markets (a market that opens every five days). Today, it is a permanent market, but it still gets much busier on days that end with the number 2 and 7, which were typically market days for old five-day markets. The Jungang Market is also a great place to be at night. In particular, it was selected for the 2016 Night Market Contest by the Ministry of Government Administration and Home Affairs, thanks to arcades on the north side of the market and roughly 20 Hanok-styled merchant stalls selling a variety of foods. Jungang Market has tables near the food stalls, so you can buy whatever you want, sit down, and enjoy your meal. The food stalls offer a variety of foods, including cream shrimp, fried giblets, and rice noodles. Don’t worry about the calories! Think about all the calories you burned walking throughout the day! So, fill your plate up and enjoy the delicious late-night snacks available at the Jungang Market. 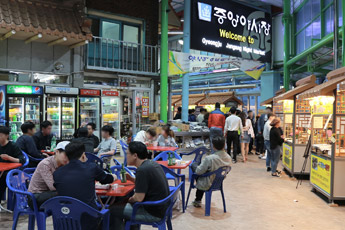