Dongnamsan Mountain from Head to Toe

Dongnamsan Mountain from Head to Toe
In his book “Samguk Yusa,” the writer Il-yeon described Gyeongju as “Sasa Seongjang (寺寺星張) and Taptap Anhaeng (塔塔雁行).” In other words, temples are connected to each other like stars in the Milky Way, and pagodas are scattered across the city like a flock of geese. As Il-yeon so aptly described, the entire city of Gyeongju became a museum of Silla artifacts over the years. Many pagodas were erected and Buddha statues were carved on each rock wall in Namsan Mountain, which Silla considered to be a sacred location.
Where else in the world would you be able to see the entire mountain listed as a UNESCO World Heritage Site? That makes Namsan unique. It is home to 694 cultural heritage sites, including 13 royal tombs, four mountain fortresses, 150 temples, 129 Buddhist statues, 99 pagodas, 22 stone lanterns, and 19 Lotus Flower Pavilions. 48 of these heritage sites, including one national treasure, have been designated as cultural assets. Take a stroll along the "Dongnamsan Trail," which is about 8 kilometers from Woljeonggyo Bridge to Tongiljeon. The Samneungga Trail, which stretches to Samneung via Oreung and Poseokjeong was built in 2011, and the Dongnamsan Trail was refurbished in 2014. Let’s take a look at Dongnamsan Mountain, a perfect place to experience the harmony between nature and human culture!

The starting point of the Dongnamsan Trail walk is Woljeonggyo Bridge, which also serves as the starting point of the Samneung Trail. One thousand years ago, the people of Silla passed across the Woljeonggyo Bridge to get to Wolseong and Namsan. When the correct location was discovered in a record written in the Samguk Sagi, restoration began in 2008 on the site of the Namcheon stream. Restoration of the bridge and both gateways took ten years to complete. Woljeonggyo Bridge, which was built over Namcheon Stream, has a striking look. It is also famous for its beautiful view at night.

The people of Gyeongju say that this tabernacle Buddha looks like a grandmother. The warm expression on her face is reminiscent of a grandmother. This charming, 1m-deep tabernacle was carved into a towering rock face at the foot of Dongnamsan Mountain with a seated Buddha placed inside. It appears to have a hood over its head, and its slightly bowed face with a smile seems to be looking at people. Overall, the posture is one of feminine beauty.
You can get a glimpse of the excellent workmanship as the clothes worn on both shoulders flow down to cover the pedestal of the Buddha. This Buddha statue is the oldest of the Silla Buddhas in Namsan, Gyeongju. It appears to be made during the 7th century, and the valley is believed to have been named Bulgok (Buddha Valley) to honor and celebrate the beautiful Buddha tabernacle. When the morning sun rises to shine the tabernacle, the Buddha’s face shines brilliantly. 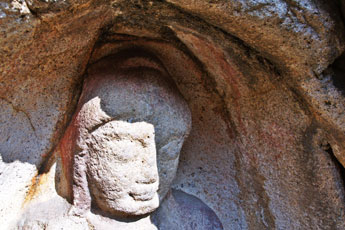 If you walk down from Bulgok for another 10 minutes, you’ll find the entrance of a small temple called Ongryongam. Inside the temple, you’ll find a huge rock 9m in height and 40m in circumference. The universe of Buddha is represented on the slopes of this rock. On the southern side of the rock there is an independent bodhisattva statue, and on the eastern rock side there are statues of Buddhas, bodhisattvas, monks, and flying maidens.
The carved Buddha statues and Bodhisattva statues all have magnificent lotus-shaped pedestals and halos each with a distinct appearance. On the western side of the rock are the Bodhisattva and two Oleaster trees under which Buddha was said to have reached enlightenment. Nine- and seven-storied pagodas are engraved onto the northern side of the rock with the Buddha sitting on the lotus pedestal in between. These are unique because they implicitly express Buddha's universe as if drawn on the rock wall. 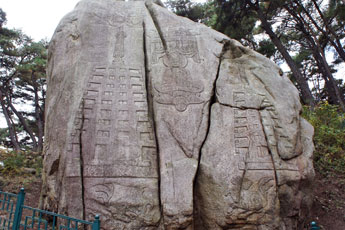 If you’re feeling tired, take a break from your walk at the Gyeongsangbuk-do Forestry Environment Research Center. The institute specializes in forest-related research, including studies on forest environments, pest control, forest products, and forest management techniques. Various forest resources are managed in the area for the purpose of research. Many visitors come here every year as it is open to the public. The Institute also offers a Guided Forest Tour Program and has a Forest Center for Children. The trail is divided into eastern and western sections with Tongil-road at the center, which is popular because it features special trails like the Mountain Magnolia Trail, Horse Chestnut Trail, the Metasequoia Trail as well as wildflower beds. The log bridge over the stream is especially famous as a photo spot.
As of November 2019, the eastern sector is under repair (expected to reopen during the latter half of 2020). In the western section of the Institute is a picnic table, pavilion, and forest trail. It's a good point to sit and relax. 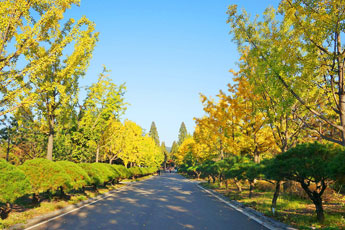 These two brothers King Heongang (49th King) and his brother the King Jeonggang (50th King) ruled during the Silla Kingdom during its heyday, and their tombs stand adjoined at the foot of the Dongnamsan Mountain. During the reign of the two kings, harvests were bountiful and the streets were filled with the songs of happy subjects.
The tombs of the two kings are similar. The pine forest leading up to the royal tomb is gorgeous, and the pines surrounding tombs create a cozy atmosphere. The Royal Tomb of King Heonggang was built as a four-level circular mound tomb. The tomb of his younger brother King Jeonggang is the same shape with the only difference being that it is three levels high. After excavation, archaeologists dated the structure and retrieved relics from the tomb back to the 8th century, which introduces some doubt to the claims that the tombs belonged to King Heongang and Jeonggang, both of which ruled Silla during the 9th century.

If you walk for about five minutes from the Tomb of King Heonggang and Tomb of King Jeonggang, you’ll reach Tongiljeon. The shrine was built in 1977 to commemorate first unification of the Korean Peninsula during the three kingdoms period. Inside the pavilion is a portrait of King Taejong Muyeol, Munmu the Great, and General Kim Yu-shin. In the corridor by the pavilion, there is a series of ancient paintings, which record how the three kingdoms were unified. The area outside the pavilion is also spacious, and the landscape is well designed with appealing scenery. To the right of the entrance is a pond filled with lotus during the summer. The view from Tongiljeon is outstanding since it is located on a fairly high hill. The road stretching out in front of Tongiljeon is also famous for Gingko trees and their beautiful leaves in autumn.

Right in front of Tongiljeon is a pond and pavilion with Dongnamsan Mountain spreading out beautifully in the background. This is the location of the legend concerning the 21st King of Silla, King Seoji. When he traveled to Dongnamsan Mountain he approached the pond and saw an old man coming out from the water. The old man gave the king a note which said, “Shoot the zither case.” Taking those words to heart, the king returned to the palace and immediately shot the zither case with his bow. Inside the case was an assassin who had been waiting to kill him. The note had saved his life. According to the Samguk Sagi, the pond was called Seochulji from then on. All around the pond is a path donned with beautiful Crape Myrtle trees. Seochulji is also known for its views at night. So it might be a great idea to return after sunset.

Go just a little further from Seochulji, and you’ll find the Namsan-ri three-story stone pagoda. The pagoda consists of two twin towers and is unique because it follows the style of Bulguksa's Seokgatap and Dabotap, which were built as twin towers but with different styles. The eastern tower takes the form of a Majeonseok Pagoda, while the western tower is in a typical three-story stone pagoda style. Typically, twin towers built during the Unified Silla era featured two identical towers. This is why the towers in Namsan-ri appear somewhat unusual and unique.

#93 popular cafes on the Dongnamsan Trail

If you want to take a break on your way to Dongnamsan Mountain, stop by some of the cafés along the way. 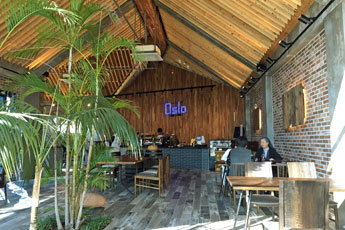 Oseullo is a cafe that might remind you of a forest garden. The glass windows of the café create a bright atmosphere. 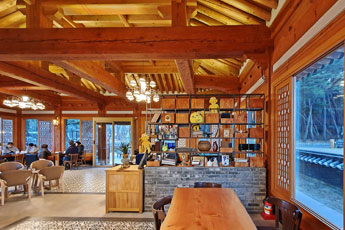 This famous backdrop for Kang’s Kitchen Season 2, has been converted into a beautiful Hanok café. In particular, one side of the café is decorated with prop dolls used during the filming of Kang’s Kitchen 2 - the mysterious, weird, and delicate dolls. 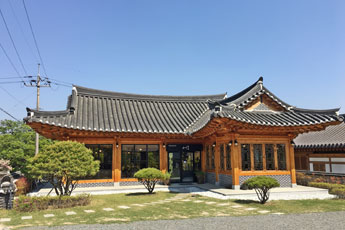 Café Seo-O is a Hanok style café located just behind Seochulji. It has a great atmosphere with an outdoor terrace overlooking Seochul-do. Café Seo-O also has an excellent brunch menu.