Pilgrimage to the UNESCO World Heritage Sites in Gyeongju

Bulguksa Temple was first listed as a UNESCO World Heritage Site along with Seokgulam, Seoul Jongmyo Shrine, and Hapcheon Haeinsa Temple in 1995. In Korea, there may be some people who have never come to Gyeongju, but have visited Bulguksa and Seokguram. Both heritage sites are prime examples of the outstanding cultural heritage of both Gyeongju and Korea. One can appreciate people’s devotion to Buddhism in their use of the best building techniques and substantial resources that went into building the Bulguksa Temple. The Buddhist doctrine melds together with temple building to form an ideal arrangement.

In addition to the two main halls, the auditorium building, Musuljeon, Guanyin Temple with Guanyin Bodhisattva, and Bronze-Gilt Mahāvairocana Seated Buddha Statue (National Treasure No. 26) all sit in great harmony and balance. Admire the intricateness and architectural aesthetics used to express the ideals of a Buddhist universe at Bulguksa Temple.

Under the solid artificial dome, the main chamber serves as a prime example of Silla-styled Buddhist art. The endlessly benevolent and gentle expression on the faces of statues along with the grand scale evoke emotions beyond awe and expression. On the very back of the main Buddha is a cross-sectional grotto, which features the Eleven Faced Guanyin Statue. Also, a small tabernacle was built around the dome to house ten additional Buddha statues. The Buddhas on the left and right sides of the front row have been stolen at some point by thieves. Today, only eight remain. Under the tabernacle, there is a Cheonbu Statue and four of the Bodhisattva in the front, and ten monk statues in the back. Each has different facial expressions and posture, making them look extremely lively and animated.
Seokguram Grotto is a structure in which a square chamber is attached to the front of the original chamber. There are Four Heavenly Kings statues in the passageway connecting rear room with the room, and two Deva Kings and eight guardian god statues who protect the shrine from evil. It is a highly detailed place.

Although Seokguram is one of the masterpieces of Silla-styled Buddhist art, the main Sakyamuni Buddha today is protected behind a large glass screen. During their occupation of Korea, the Japanese plundered artifacts from Korea. They also “restored” Seokguram without any knowledge of the science or building techniques that went into building the structure in the first place. At that time, it was decided that along with massive excavations, the site should be dismantled to facilitate restoration efforts. After everything was dismantled, the stones were lost and simply replaced by concrete. The natural spring flowing through the bedrock underneath Seokguram was also blocked up, which led to two problems. The concrete blocked ventilation, which caused a catastrophic build-up of moisture. Also, blocking the stream meant that the water had no outlet to escape. Soon, moss started to spread across the entire complex. This faulty restoration is why Seokguram sits pitifully behind its protective glass screen today.

Everyone should understand this history before visiting Seokguram. You can learn about Seokguram and the outstanding Buddhist architecture used during the Silla Dynasty at the place nicknamed the “Second Seokguram” – The Silla Art and Science Museum.
There is an exhibition detailing the scientific secrets of Seokguram, which are now trapped behind glass windows, fighting a war with moss and moisture. There is a 1/5 model of Seokguram, where you can look closely at the main chamber and the internal structure.

Gyeongju is often referred to as an “open-air museum.” Precious cultural heritage and relics are scattered throughout the city. Naturally, in 2000, almost the entire area encompassing Gyeongju and Namsan Mountain was registered as a UNESCO World Heritage Site under the name “Gyeongju Historic Area.” This area consists of five districts: Wolseong district, Hwangryongsa district, Daereungwon district, Bomun Tourist Complex, which are all located near the city area, and finally, the Namsan district, which is further south of the city. These five districts contain a number of cultural monuments, including pagodas, temples, palaces, royal tombs, buddhas, and mountain fortresses, built across more than 1,000 years of history.
The first place you should check out on your way from Bulguksa to the city is the Hwangryongsa district. The main relics of the Hwangryongsa District include the Bunhwangsa Temple and Hwangryongsa Temple.

Bunhwangsa Temple was built in the third year of Queen Seondeok’s reign (634 CE), and was the state temple of the Silla Dynasty, which is why archaeologists believe that it would have been as immense in size as Hwangryongsa Temple. During the Goryeo and Joseon Dynasties, foreign invasions left most of the temple buildings in ruins. Currently, all that remains of the 30th National Treasure of Bunhwangsa Temple is the Mojeon Stone Pagoda, a Silla Dynasty well called Samryong Byeon-Eojeong, and part of a monument honoring Buddhist monk Wonhyo’s achievements called Hwajangguk Sapjeok.
Next to Bunhwangsa Temple is the temple site of Hwangryongsa Temple, which used to be the largest Buddhist temple in the East. Built across almost a century from the reign of King Jinheung to the reign of Queen Seondeok, the main building of the temple housed massive Triad Buddha statues. The Temple also featured a grand nine-story wooden pagoda (82m tallh), which was equivalent to the height of a 25-story apartment building today. Unfortunately, the Temple was burned down by Mongolian soldiers during the Goryeo Dynasty. Today, only a part of the building site and some foundation stones remain in the vast site.

The Wolseong district is home to the royal palaces of the Silla Dynasty. Travelers can visit Wolseong Fortress, the royal palace where princes used to live live, and Cheomseongdae. Wolseong is currently undergoing excavations as part of the Silla Royal District Restoration Project. The interior building site is divided into four zones (A-D) to conduct excavation research. The excavating company also runs the "With Wolseong" project to share the excavation process and findings with the public. If you visit Wolseong on Friday during the summer, you’ll get a chance to see the site up close in person. 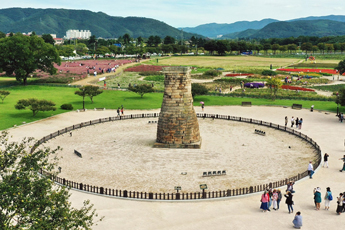 Just a five-minute walk away from Wolseong is Cheomseongdae. This scientific stone building is the “oldest astronomical observatory in Asia” and was built by Queen Seondeok. It is filled with ancient scientific secrets. The 365 stones from which Cheomseongdae was built represents the number of days in a year, and the total of 29 levels and 30 levels of stone steps (depending on which level to count from) represents the number of days in a lunar month. The top 12 columns and the bottom 12 columns of the window symbolize the 24 seasonal divisions of the year according to the lunar calendar. Experts believe astronomers would have stepped inside the structure as they observed the starts. The top 12 tiers and bottom 12 tiers divided by a window in the middle, represent the 12 months and 24 seasonal divisions of the year. So, look and think carefully to imagine how our ancestors would have used Cheomseongdae. 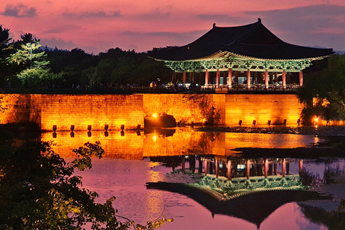 To the east, south, and north of the Daereungwon Ancient Tombs District, there are numerous tombs of varying sizes. First, excavation works are ongoing on the eastern side in Hwango-ri. You can visit excavation sites at the Jjoksaemjeok Excavation Hall. In the northern side of Daereungwon Ancient Tombs, you’ll see the Nodong-ri and Noseo-ri Tombs. Nodong-ri is home to the largest and most substantial tomb in Gyeongju, the Bonghwangdae tombs, while Noseo-ri is home to Seobongchong, Geumgwanchong and others. The entire area is a popular picnic spot. Finally, to the south, the Hwangnam-ri tombs serve up splendorous views at sunset. You won’t be able to take your eyes off the sunset that turns red against the tombs and metasequoia trees.

Yangdong Village was listed together with Hahoe Village in Andong as World Cultural Heritage sites in August 2010. The village was the clan village of the Son Clan of Wolseong and Lee Clan of Yeogang, and there are many ancient houses that show the traditional house structure of the family in the Joseon Dynasty. Looking from the peak of Seolchangan Mountain, the mountain has four ridges and valleys that form the shape of the Chinese Character “Mul” (勿). The valley features 160 ancient tiled houses (古瓦家) as well as straw-roofed houses (草家). Yangdong is said to be a hotbed for wealthy and talented people, as its mountains and terrain are some of the best in Korea. According to history, Yangdong Village produced 116 officials during the Joseon Dynasty, and it was home to some of the most respected scholars of their time, including Son Jungdon and Lee Eon-jeok.

The main old houses include Hyangdan, a house granted by the king to Lee Eon-jeok (Literary name: Hwejae), Seobaekdang (Songcheom Head House), the Mucheomdang house where the father of the late Lee Eon-jeok lived, and the house where Son Jungdon (Literary name: Woojae) set up a new branch of the Son family.
Meanwhile, Yangdong Village offers a Traditional Culture Experience Program from spring to autumn every year to preserve and promote its traditional culture.

If you enter through the Yeokrakmun Gate (main gate), you’ll see a pavilion called "Mubunru," this is the first example where an upper floor was included in the construction design of a Confucian Academy. In the front is the “Search for Benevolence Hall” (Guin Dang), while to the left and right sides are the Mingujae and Amsujae dormitory buildings. In terms of signboards, there are two Oksanseowon Confucian Academy signboards - the one on the front of the auditorium was written by the famous calligrapher of Joseon Kim Jung-hee. Behind the lecture hall is a shrine where the ancestral tablet, memorial stone, and letters of Lee Eon-jeok are enshrined.
At the back of the Academy is a cool, clear stream with large flat boulders and a spot called Seshimdae which literary means “a place to cleanse one’s mind.” Seshimdae was created to teach students that one must get in touch with nature to become a true scholar.