Shall we name the things you can do at the end of the year? You might have a party to express feelings of half-regret and half-pleasure about the ending of the year. You might plan a trip to watch the first sunrise of the next year. Also, you might want to purchase of a brand-new planner. Here's one of things you should add to that planner before the new year: a list of the annual festivals & events in Gyeongju. This will help you whenever you are making plans to travel in Gyeongju.

(* Details including the schedules, contents and locations of the festivals/events in this guide may be changed.) 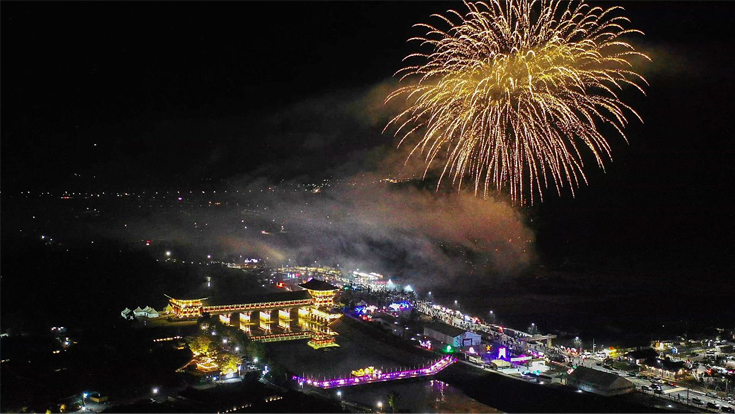 What's the most splendid season in Gyeongju? It's definitely spring.

In April every year, the 'Gyeongju Cherry Blossom Festival' begins when the cherry blossoms are in full glory. Bomun Tourist Complex, Daereungwon, Cheomseongdae Observatory, and Donggung Palace & Wolji Pond — whenever you go, you can enjoy the full feast of flowers at the festival. Check it out! 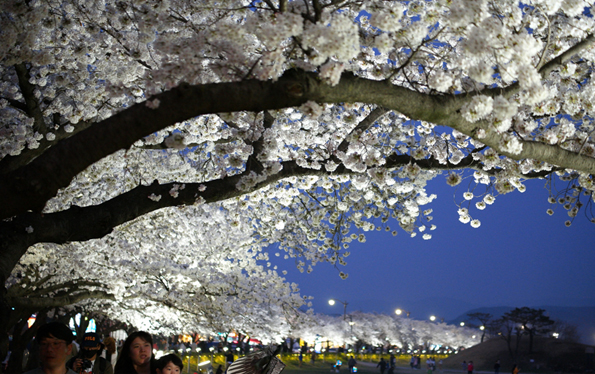 Gyeongju in spring with the cherry blossoms in bloom

In late April, when the Cherry Blossom Festival is about to end, the Silla Pottery Festival is just around the corner. It's where you can encounter the genuine value of a 1,000-year old culture that has developed from Silla's pottery traditions. Thousands of earthenware products made by the potters in Gyeongju are displayed and sold.

A walking track measuring approximately 7 km (Bomunho Lakeside Way) has been created, so you can walk round the beautiful lake. On every full-moon night of every month, you can also join in some events while strolling beside the lake. These events are called 'Moonlight walks by Bomunho Lake on the nights of the full moon.' Even on cold nights, the walking events take place despite Jack Frost.

Gyeongju is where keeps the tale of the 'Manpasikjjeok' pipe that brought peace to the chaotic world through its beautiful sounds resonates once again. In early summer, pipes from all over the world are gathered together at the 'Gyeongju World Traditional Wind Instrument Festival,' creating an opportunity for the world to harmonize with sounds. This festival not only features performances with various world pipes, but also additional events including musical instrument exhibitions and a Daegeum (a traditional Korean pipe) competition.

Silla Cultural Festival, the representative general cultural/arts festival in Gyeongju, was held in 2019 with a magnificent array of extensively added/changed contents. In particular, an event that reproduced the building of Cheonsengdae Observatory gained a huge amount of popular attention. From 2018, this festival will continue to be upgraded by adding plenty of attractive contents. The main events, multiple relevant performances, exhibitions and experience programs will be prepared. You should have high expectations for next year's festival! 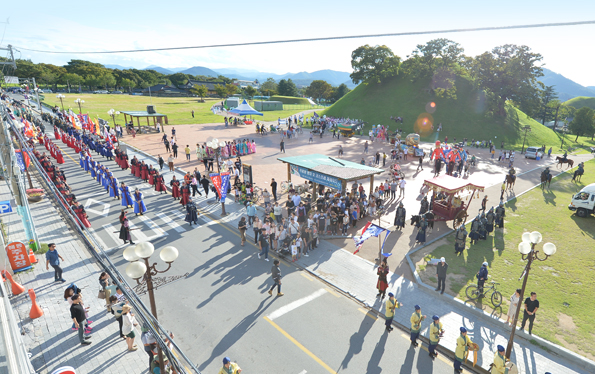 In autumn, Geongju is decorated during a festival with the theme of the 'Bell of King Seongdeok' that echoes with deep emotional resonance. The 'Silla Sound Festival: Emille Exhibition', held around Cheomgseongdae Observatory every October, offers various exhibition/experience programs to let the public know about the value & spirit of the Bell of King Seongdeok, which has received praise as the best existing bell. 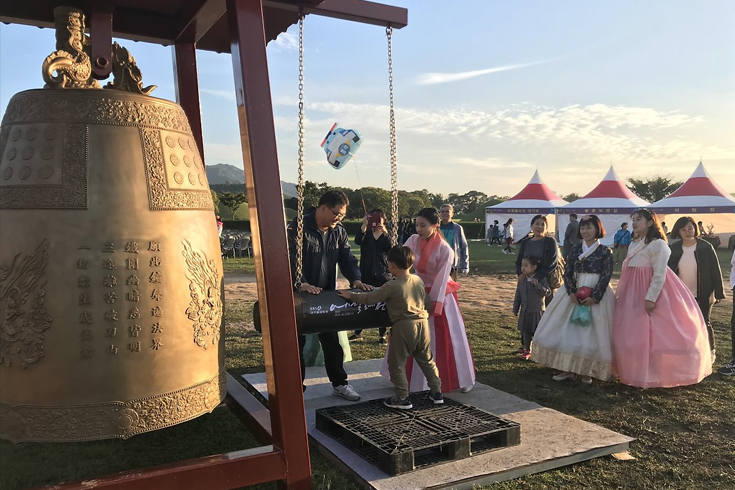 Every fall, you can become immersed in the fragrance of tea around Cheomseongdae. This is due to 'Choongdamje,' a tea cultural festival established to remember the great Buddhist monk 'Choongdam' in the Silla Age. It's said that the monk climbed the Samhwaryeong on Mt. Namsan on the 3rd day of the 3rd lunar month & on the 9th day of the 9th lunar month to dedicate tea to Buddha, saying a prayer for national peace. To pay tribute to his devotion, Choongdamje offers you multiple tea ceremony experience programs.

On the last day of the year, the 'Watch-night Bell Tolling Ceremony' is held in Silla Great Bell Park, which is on the opposite side of the beautiful 'Bonghwangdae' ancient tomb in the center of Geyongju. This ceremony was hosted for the first time in 2017 and attracted many participants, and it will now be an annual event. You can welcome the new year with the hopeful sounds of the Silla Great Bell and a grand chorus of 500 citizens.

In the area around the Tomb of King Munmu, which is famous as spot with spectacular sunrises on the East coast near Gyeongju, a sunrise-greeting event is held every year, which is called the 'Haeryong (sea dragon) Sunrise Festival.' Starting in the night of December 31st ahead of the new year, this festival features performances and a countdown to the new year, and the participants then greet the first sun of the new year together. In addition, you can enjoy other events including a traditional calligraphy demonstration and wish-lantern flying. 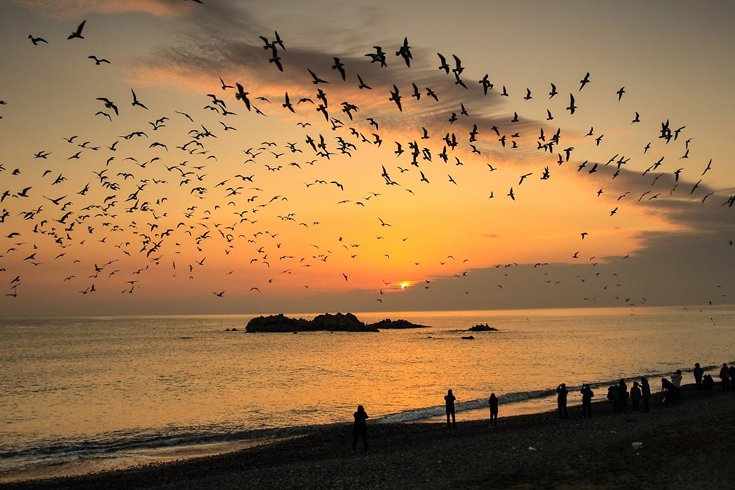 Sunrise at the Tomb of King Munmu 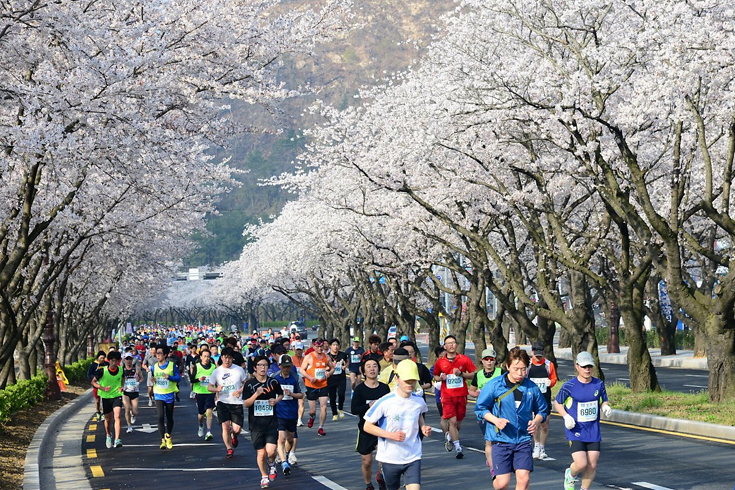 In Gyeongju, where great and small sports events are held all year round, a powerful race is held to let us know that spring has arrived. The name of this race is the 'Kolon Relay Marathon,' in which middle- and high-school marathoners develop their dreams at the Bomun Tourism Complex and Gyeongju-si. During the relay, the high school class completes 6 sections of the marathon course, and the middle school class completes 4. Please support the next generation of Lee Bong-ju & Hwang Young-jo, who each run their own section of the race. 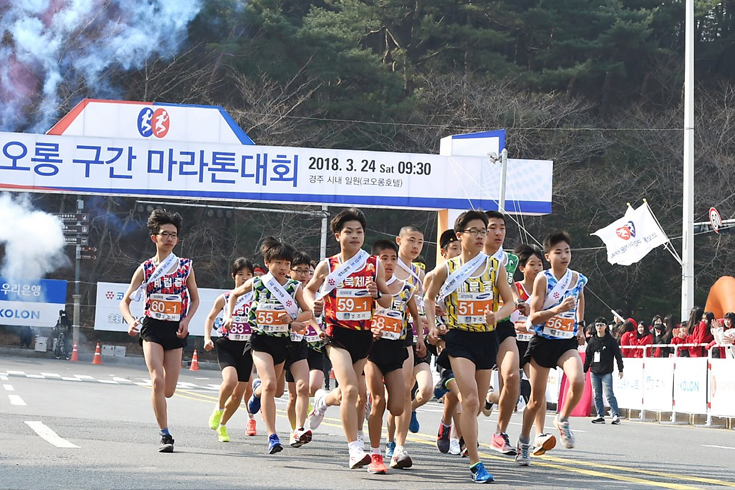 Have you ever joined the 'Geyongju Cherry Blossom Marathon,' which has the reputation of having the most beautiful marathon course? Create your own unforgettable memories by running on these lanes with the cherry blossom trees in full bloom. This competition includes not only full/half courses for athletes & marathon lovers, but also shortened courses (5km/10km) for non-athletic participants. 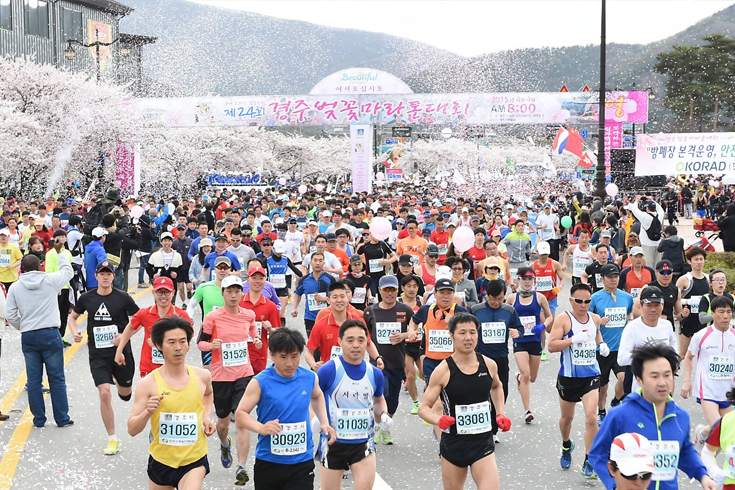 In 2017, a baseball competition for women named after the first queen of Silla, Seonduk, was held for the first time in Gyeongju. In this meaningful competition, founded for the expansion and development of Korean women's baseball, lively games are presented with approximately 30 Korean women's baseball teams. Among the participating teams, please pay attention to the 'Mighty Women's Baseball Team' that has its roots in Gyeongju. 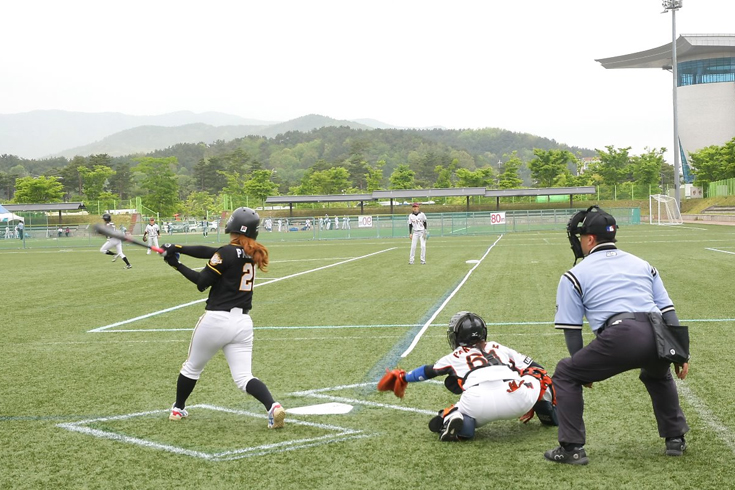 A chance to find the next Sohn Heung-min/Park Ji-sung occurs at Gyeongju Hwarang's Flag National Youth Soccer Tournament. During the hot summer days, even hotter games happen in the Gyeongju Soccer Park, at the biggest youth soccer competition nationwide that is hosted in Gyeongju, the special district for youth sports. A lot of games offer as much excitement as adult ones, calling upon you to express your support. 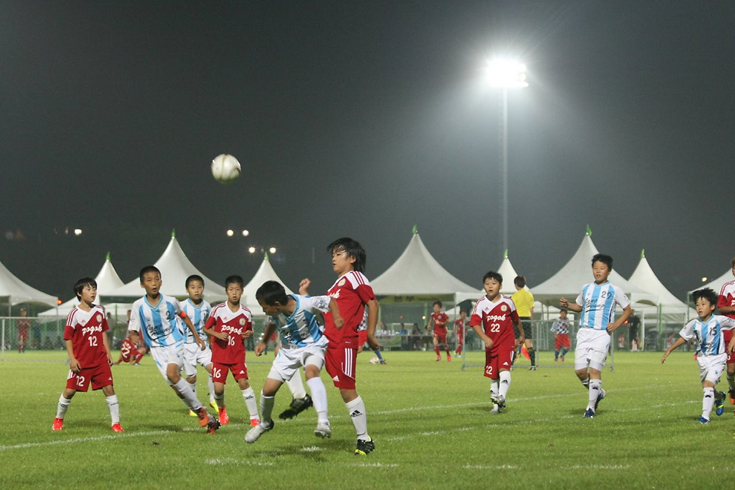 Gyeongju has two iconic marathon competitions: Cherry Blossom Marathon in the spring and Dong-A Gyeongju Marathon in the autumn, in which the participants run all over Gyeongju enjoying the deepening mood of fall. This race also accepts non-athletic participants in the 10km/5km course. Shall we give it a try? 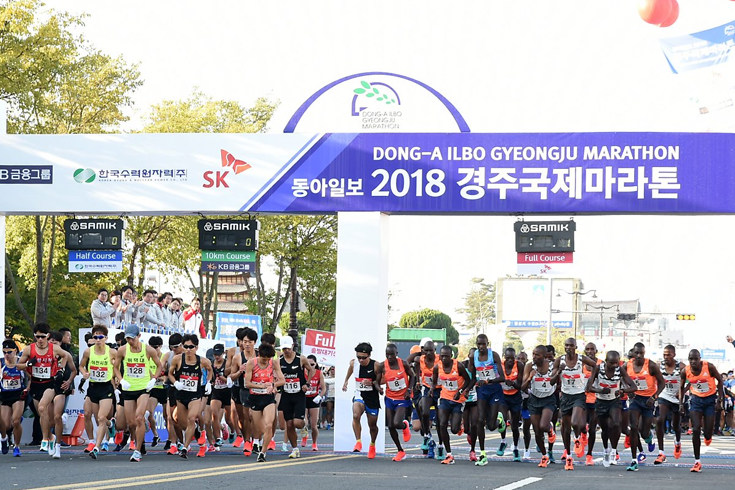 The participants experience the mood of the old capital during 'Silla's Moonlit Night 165-ri Walkathon' that is held every fall. This race was founded in 2000 to encourage walking and to raise a spirit of challenge. You can choose between two courses: a 66km (165-ri) route that goes through Gyeongju Urban District / Bomun Tourism Complex / Bulguksa Temple / top of Mt. Tohamsan and returns; and a 30km half-course from the Bomun Tourism Complex. 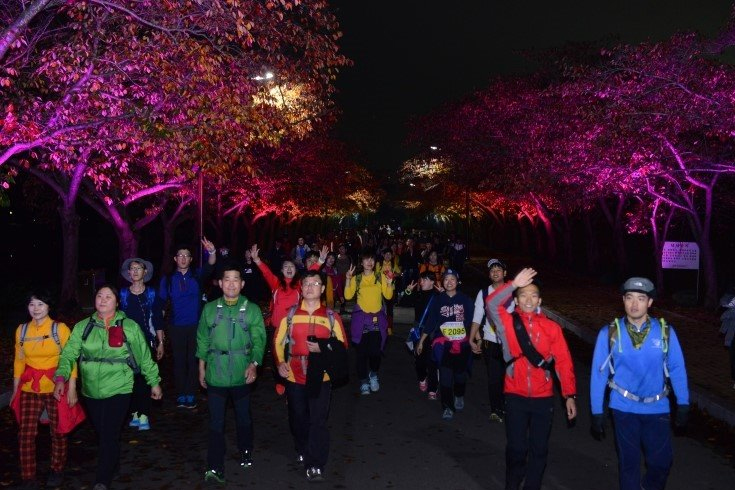 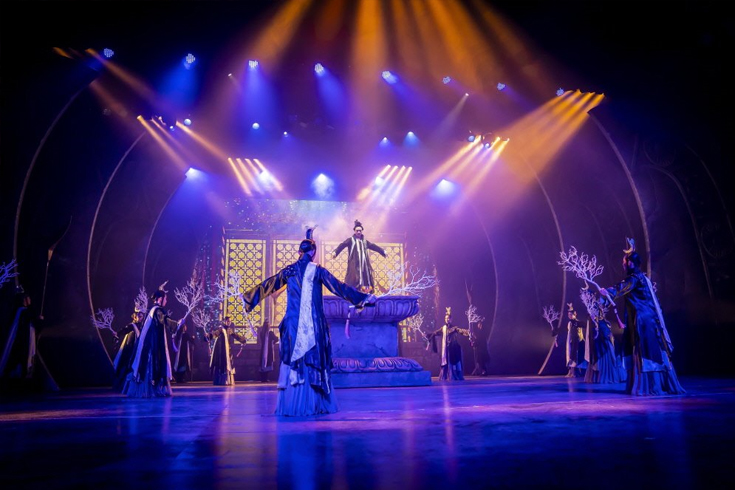 Bonghwangdae Music Square has hosted Gyeongju's representative night with permanent concerts, which are greatly loved by both Gyeongju residents and tourists thanks to the increasing number of performers and stable progress of the performances. With beautiful Bonghwangdae as the background, take a musical trip on a Friday night. 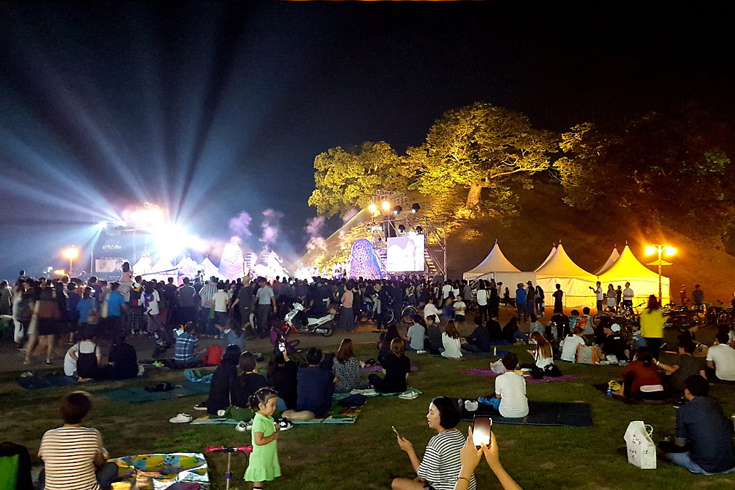 'Sillaogi', one of cultural performances held at Gyeongju Gyochon Traditional Village, creates a stage in the streets of the village. This is a performance created with music and dance is a reinterpretation of the 5 plays described in 'Hyangakjapyeong,' an old poem written by Choi Chi-won (a great scholar in the Silla Age). In the performance, there are a lot of things to see including gold-bell acrobatics, a masque, a group dance, and a lion mask dance. 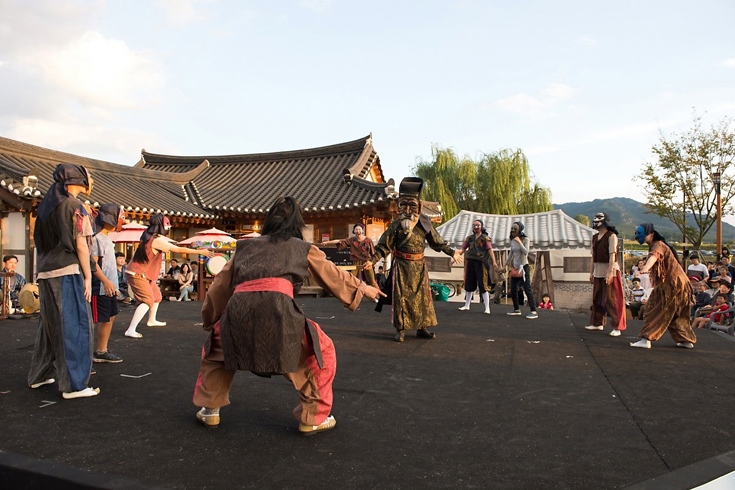 'Gyeongju Artists' Relay Exhibitions' were begun to support the creation of active work among local artists. This project helps by offering them criticism, consultations, and public support for their own private exhibitions. In the project, several local artists are selected to participate in the exhibitions in turn, and to meet the visitors in separate events. 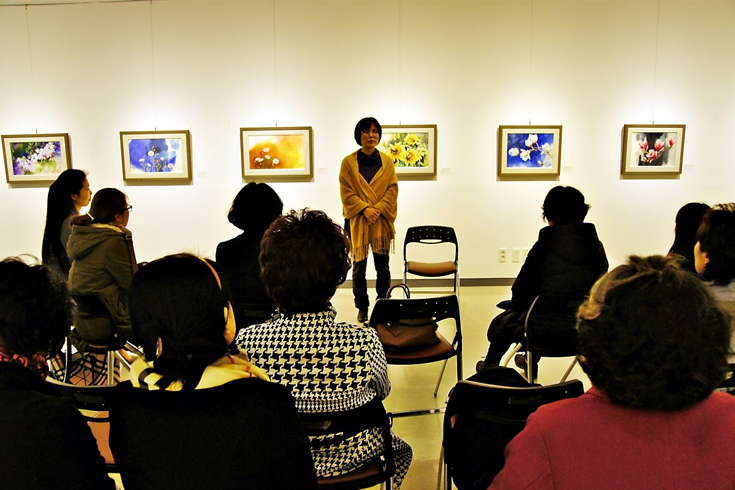 This is your chance to experience various music genres including classical music, jazz, and Korean traditional music all in one place at the Gyeongju International Music Festival. On mid-summer nights every year, beautiful musical performances are heard on the Bomun Water Stage. 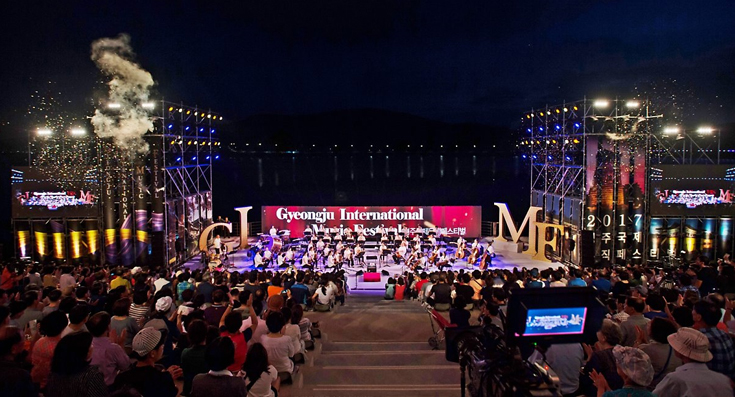 #Gyeongju representative performances: 'Flying' and 'Emille' (from spring to the end of the year)

Gyeongju World Culture Expo has continuously created performances that represent Gyeongju. Among them are two performances recommended for you here: 'Flying,' is always loved, and it is performed in stage every year; while 'Emille' is a new work for 2018. 'Flying' is a non-verbal performance that features a mixture of various genres including (rhythmic) gymnastics, martial arts, B-boying, and cheer leading. 'Emille' is a love story that breaks the caste system between Hyegong (the 36th King of Silla) and a woman named Emille from the lowest class.